Tsugumi Nazar (ツグミ・ナザール?) is a Companion in Scarlet Nexus. Her

Clairvoyance comes in handy in a team setting but causes some issues in her social life.

Tsugumi developed her psionic power younger than usual. She began seeing things that she normally couldn't, which made people afraid of her. For her younger years, she was alienated. As a result of this, she is extremely shy and often stutters or apologizes for even the slightest things. Although shy, she is still extremely loyal to her friends and platoon members.

Tsugumi has short, dark purple hair and turquoise blue eyes. She opts to wear the Rin variant of the Blk Battle Attire which consists of a school-uniform styled shirt and skirt, adorned with a long blue jay cloak. On the leg part, she wears full leggings and black loafers. She also has a small holster for her Lily-Bell revolver. When she uses clairvoyance, her eyes turn a faded purple colour.

Tsugumi tends to keep a medium range between enemies. When she engages in combat alone. she will often fire 1-3 shots before rolling to one side and firing the rest of her bullets. Upon firing the 6th bullet, she will run away to reload. If she is attacking with someone else, she will hang back and fire at the enemy, dealing a decent amount of damage. 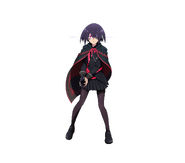