Nagi Karman was a character in Scarlet Nexus. He was Yuito's best friend and tends to talk a lot, but is very kind and supportive person. When he was brainwashed, he became the secondary antagonist in Yuito's story.

Nagi has brown hair with brown eyes, He wears a belt Around his clothes with. He wears a black pants with black and gray boots.

Nagi is a very optimistic OSF member. He has been one of Yuito's best friends and has been with Yuito since they started in the OSF. Unfortunately, being a witness to Naomi's metamorphosis, he was taken to the Old OSF Hospital for personality rehabilitation. 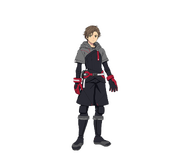