Scarlet Nexus Wiki
Register
Don't have an account?
Sign In
Advertisement
in: Characters, Other Suppression Force, Bosses,
and 2 more

Kasane Randall (カサネ・ランドール?) is the main female protagonist in Scarlet Nexus and deuteragonist of the anime adaption. She is an elite soldier with superb fighting skills and rare Psionic powers. She quickly rises in the ranks after unforeseen events and becomes the leader of Kasane Platoon.

She lost her parents in an Other attack as a child and was adopted by the Randall’s, a family running a huge military corporation. While her relationship with her adoptive parents is complicated, her adoptive sister Naomi is the only person showing her affection, leading to a strong bond and deep love between them. The hand-made hair ornament that Naomi gifted her is Kasane’s most prized possession. Kasane was scouted into the OSF at age 12 due to her above average psionic capability. She is frequently having strange dreams about "red strings". The meaning of those dreams is still a mystery to this day.

Kasane has long, grey hair with red eyes and matching flower hair ornament Naomi made for her. She opts to wear the Shinobi variant of the black military uniform, Dawn White Battle Attire and a number of other outfits. Shinobi consists of a shoulder less shirt with sleeves and grey leggings - based on Naomi's suggestion. She has a hood which she uses when Brain Drive is activated.

Kasane is a cool, confident yet very closed person to those she doesn't know all that well, remaining indifferent and often unaware of social cues. The only person that Kasane has actually spoken freely to is Naomi. Kasane's prickly and hostile personality is likely a result of the extreme emotional trauma she suffered at a young age in Togetsu.

As a teenager, Kasane did not get along very well with her adoptive parents, which is proven when they disown her after Naomi's metamorphosis, since she was reported K.I.A. Since Kasane loved Naomi, she was left heartbroken after Naomi's actual death.

Kasane is actually a very caring person, but only a few people ever actually see her caring side. She does show numerous glimpses of it however.

Symbol For Kasane's Psychokinesis (She shares this with Yuito) 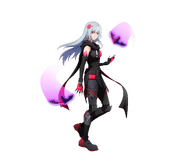